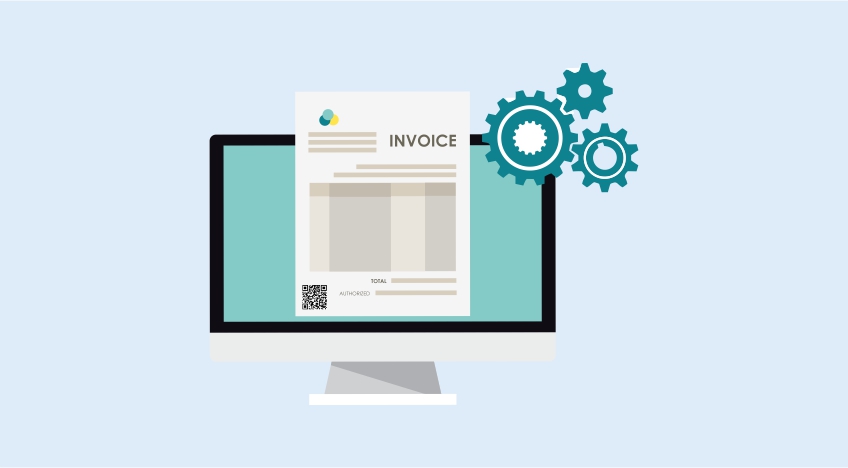 To help get a quick understanding of e-invoicing system, here are some FAQs that get quick answers to your doubts.

e-Invoice known as ‘Electronic invoicing’ is a system in which all B2B invoices are electronically uploaded and authenticated by the designated portal.

Post successful authentication, a unique Invoice Reference Number (IRN) is generated for each invoice by IRP. Along with IRN, each invoice is digitally signed and added with a QR code. This process is collectively called as e-invoicing under GST Know more on IRN, Format and process to generate it.

How does e-invoicing model work?

Today, a transaction between the supplier and recipient is done directly without the government having any proof of the exchange. Under the e-invoicing model, while the businesses will continue to generate invoices on their respective ERPs just as was being done in the past, only the standard, schema and format for the generation of invoices will be specified. This is to ensure a level of regularity and the machine-readability of these invoices.

Taxpayers are responsible for the generation of the invoice. While generating, it needs to be reported to the Invoice Registration Portal (IRP) of GST. As soon as the invoice is reported to the IRP system, it will generate a unique Invoice Reference Number (IRN), adds the digital signature for the e-Invoice and also provides the OR code. This QR Code will include vital parameters of the e-invoice and return the same to the taxpayer who reported this transaction. The IRP will also send the signed e-invoice to the seller on the registered email ID.

What are the types of documents that are to be reported into the IRP?

The following documents will be covered under e-Invoicing for now:

What is the workflow of e-invoice?

The taxpayer will continue to generate invoices in the normal course of business. However, the reporting of these invoices electronically has criteria. It needs to be done as per the e-invoice schema along with mandatory parameters. The mandatory fields of an invoice for the supply of goods are listed below:

The seller has to ensure that his accounting/billing software is capable of generating a JSON of the final invoice. The seller can create a JSON following the e-invoice schema and mandatory parameters by using the following modes:

The supplier has the option to generate ‘hash’ based on specific parameters usually three of them such as Supplier’s GSTIN, Supplier’s invoice number, Financial Year (YYYY-YY). The prescribed algorithm, such as SHA256 must be used for the hash generation. If the hash is validated, it would later become the Invoice Reference Number (IRN) of the e-invoice.

The following modes may be used to upload the JSON of the final invoice:

Hash will have to be generated by the IRP in respect of the invoices uploaded without the hash. In such a case, the hash generated by the IRP would become the IRN. Where the supplier has also uploaded hash, a de-duplication check will be performed. It is done by validating the hash/IRN against the Central Registry of GST System to ensure that the IRN is unique. Once validated, the hash/IRN is stored in the Central Registry. IRP will then generate a QR Code and digitally sign the invoice and make it available to the supplier. The IRP also sends the e-invoice via e-mail mentioned on the invoice to the buyer and seller. 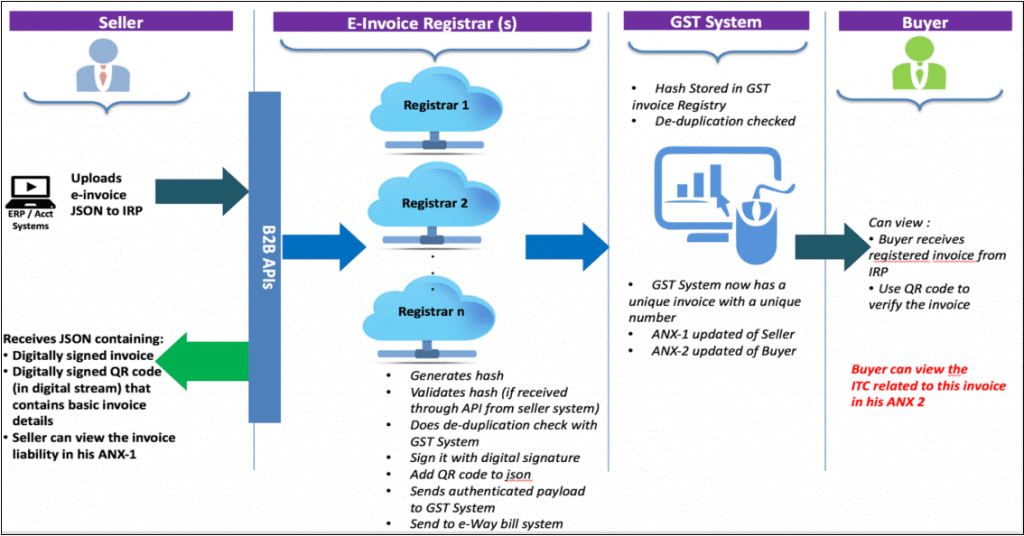 How will the system of e-invoicing be integrated with GST Returns?

An e-Invoice will be uploaded into the relevant GST return only once it has been validated and registered by the invoice registration system. After the validation has been done, it will be visible to the recipient for viewing and taking action (in the new return system).

The main aim of the tax department is to enable the pre-population of GST returns, which will reduce reconciliation-related problems. Once e-Invoicing has been implemented, the data in the invoices can be pre-populated into the relevant tables of the tax returns without the need for fresh data entry.

When will e-invoicing get implemented?

The first phase of e-invoicing was implemented from 1st October 2020 for taxpayers with an aggregate turnover exceeding Rs.500 crore. Followed by, e-invoicing for businesses with 100 and 50 turnovers.

What data will be included in an e-invoice?

As per the draft format generated by the GSTN, an e-Invoice will contain the following parts-

Can an e-invoice be cancelled partially/fully?

How can an e-invoice be amended?

All amendments to an e-invoice can be made only on the GST Portal.

What are the benefits of e-invoicing?

Video on e-invoicing in TallyPrime

Know more about e-invoices in GST