Home GST How to Generate e-Invoice in GST?

The e-invoicing system, which is already being implemented for bigger businesses and to be implemented for 50 crores and above businesses from 1st April 2021, is primarily designed with 2 key aspects. First is the adoption of a standard for the invoice, which will enable standardization and swift data exchange across the different systems. The next being the registering the invoice with Government, through Invoice Registration Portal (IRP) which will ensure the authenticity of invoices 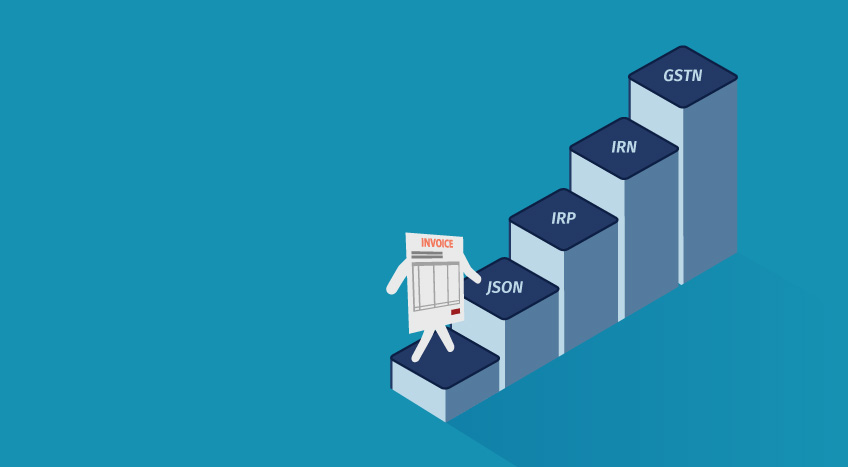 At a larger picture, it is believed that e-invoicing will play a key role to ensure the interoperability of the data with various systems alongside curbs tax evasion.

With the implementation of e-invoicing, the GST system shall be able to validate all the B2B transactions electronically and pre-populate the same in taxpayer’s GST return forms and e-way bill, as per the e-invoice details uploaded by the taxpayer.

Before getting into the process to generate an e-invoice, it is important to note that there has been a major misconception surrounding e-invoice generation. The famous misconception here is that the businesses can generate the invoices centrally through the governments portal.

That’s not true! e-invoice does not mean the generation of invoices from a central portal of the tax department. Instead, an e-invoice requires a business to generate the invoice in the prescribed format using the accounting software and upload it to the portal designed to authenticate such invoices.

Let’s now understand the steps to generate the e-invoice

How to generate e-invoice?

As illustrated above, the following are the detailed steps to generate an e-invoice in GST.

Step -1 Creation of e-invoice JSON: The first step is to create the invoice JSON using the accounting software as per the prescribed format. The taxpayer can generate it either using ERP software or using the offline utility provided by the government.

Step -2 Uploading of JSON: In this step, the invoice JSON for every B2B invoice generated using accounting software or any other utilities are uploaded to the IRP system. If the ERP software is integrated with IRP via GSP, the upload of the JSON file will be automated, meaning the system sends the required details directly to the IRP portal.

Step-3 Verification of e-invoice JSON: In this step, the IRP system validates the e-invoice JSON and checks the central registry of GST for any duplication.

Step-4 Generating invoice reference number (IRN): After successful validation of e-invoice JSON, the IRP system will generate IRN. IRN generated will be a unique number of each invoice for the entire financial year. Also, the e-invoice JSON will be updated with a digital signature along with a QR code.

Step-5: Receiving digitally singed e-invoice JSON: Here, the digitally signed e-invoice  JSON along with QR code is sent to the supplier. The IRN and QR code will be printed on the invoice before issuing it to the buyer. In case of an integrated environment of ERP and IRP via GSP, the software will automatically fetch and print such details

Step-6 Transfer of data to e-way bill system and GST system: The invoice JSON data uploaded, will be shared with the e- way bill and GST system, for preparing e - waybills and for auto-population of GST return.

Got questions on e-invoice? Read our article ‘What is e-invoicing’ to know and understand the fundamentals of the e-invoicing concept.

Watch: How to Generate E-invoices Online in TallyPrime

Watch: How to Generate E-invoices Offline in TallyPrime

Know More about Invoices in GST