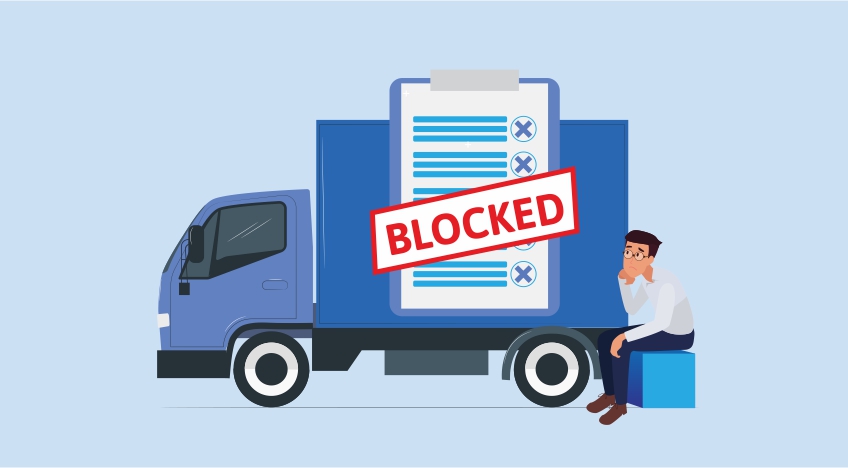 Haven’t filed your GST returns for the last two consecutive return periods? Soon e-way bill generation facility will be blocked for you. Yes, you read it right. In an effort to reduce return filing defaults, the government came up with the concept of blocking e-way generating facility on the e-way bill portal.

This was first introduced in 2019, however, given the challenges due to COVID pandemic, it was temporarily suspended. With the advisory released on e-way bill portal, it is decided to resume this provision with effect from 15th August, 2021. Let’s understand more about blocking of e-way bills generating facility.

With effect from 15th August,2021, the e-way bill generation facility will be blocked for taxpayers who have not filed GST returns for the previous two consecutive tax periods. If you are filing a return on a monthly basis, the last two months would be considered. In the case of quarterly returns, the previous two quarters will be considered.

For example, if a taxpayer has not filed GSTR-3B for May 2021 and June 2021, the GSTIN will get blocked for e-way bill generation in the portal for the subsequent month.

When will the e-way bill generation facility be blocked?

The system is designed to continuously check the status of returns filed in Form GSTR-3B or the statements filed in Form GST CMP-08. In case the system detects the default in return filing for the previous two consecutive tax periods, the EWB generation facility will be blocked from the subsequent month. Let’s say, if returns are not filed for September and October (monthly basis), e-way bill generation will be blocked from November.

To start with, the system will restrict e-way bill generation in the following case:

As you already know, an e-way bill needs to be generated for consignment involving the movement of goods with the value of 50,000 (a higher threshold value in a few states). Blocking of e-way bills generation facility will have a significant impact on the business.

First, you won’t be able to move the goods beyond the notified consignment value. Second, not moving/delivering goods on time, your business may come to halt and more importantly, your credibility in front of your customers takes a hitting.

If the goods are transported without an e-way bill, a fine equivalent to the tax amount would be applicable. Further, it may also be seized or detained, and the goods may be released only on payment of the tax amount along with a penalty.

It is recommended that businesses file their pending GSTR-3B returns/GST CMP-08 statements immediately and continue generating e-way bills on the portal.

How TallyPrime helps businesses to stay compliant with GST

The intuitive intelligence designed in TallyPrime helps you to generate 100% accurate returns in a matter of minutes. This is made possible using Tally's renowned ‘Prevention - Detection - Correction' technology. This ensures your returns are accurate and more importantly, help you file the returns on time.

Guess what? TallyPrime comes with a fully connected solution to generate e-invoices and e-way bills instantly, without the need for manual intervention. Haven’t tried TallyPrime? Try it yourself for free

Your GSTIN will be blocked for e-way bill generation facility if you have not filed Form GSTR-3B return / Statement in FORM CMP-08 for the last two or more consecutive tax periods.

Your e-way Bill generation facility would be automatically unblocked on the e-way bill portal if you file your GSTR-3B return/statement in FORM CMP-08 and the default in return filing is reduced to less than two tax periods.

You may also file an online request for unblocking of e-way bill generation facility, in Form GST EWB 05, to your jurisdictional tax official.

An SMS/ e-mail is sent to the registered mobile number/ email id of the taxpayer whose e-way bill generation facility has been blocked. Also, during such period, you or any other user, including a transporter, will not be able to generate an e-way bill against your GSTIN, either as a consignor or consignee.

Note: Every time there is a change in the status regarding unblocking of e-way billing system, an SMS and email are sent directly to the taxpayer.

Got more questions? Download the FAQs PDF on blocking of e-way bill.